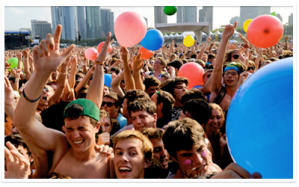 Lollapalooza is more than just a sensory overload of 130 of the most notable and buzzworthy bands from across the globe. In between your must-see sets, Lolla has plenty of happenings to keep you hydrated, educated, satiated and happy as a clam. See Chili Peppers, Black Keys, Jack White, Florence & The Machine and hundreds more!

Deal alert! Follow Poor Girl on Twitter (@poorgirlsguide), for the best deals and freebies. We’ll be live tweeting, great deals and where to find them on Lolla grounds all weekend long.