In between the bustle of the move, we packed the clan and set out for a 10-day trip to Italy! Packing for an 8 month old and a 2.5 year old was an intimidating task but I decided to go with the less is more approach. When I was planning for the trip, I did a lot of research from other parents to get some ideas for anything that would make the journey as smooth as possible. I wanted to share a post of what worked for us and what didn’t when traveling internationally with two small children. We had some wins and some fails for sure!

We decided to fly direct to Rome in the afternoon in the hopes that they would sleep on part of the flight since we’d be landing in the morning in Italy. On the way home, we left in the late morning, thinking they would take a long nap and then just push through to bed time in Chicago so we could get them oriented. We also flew home on Thursday so we’d have the weekend to get them acclimated. This system actually worked for the most part. The 2nd night back in the states was the night our baby was actually awake in the middle of the night. I’m thinking Thursday she was just so exhausted and then Friday it took her that full day to get her days and nights back together. Thankfully, she was back to sleeping through the night by Saturday.

In between Rome, we took a high speed train down to Naples where we would stay in the Amalfi Coast for the remainder of the trip. We didn’t want to have too many legs to the trip that involved carrying luggage and uprooting the littles so we stuck to day trips on ferries and one overnight stay away from our main hub in Sorrento. This was totally doable and it was awesome not to have to bring the full luggage around with us everyday. 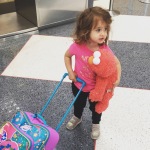 Here’s a run down of what I packed for the kiddos and why:

That’s the low down of our trip! It was a great time and even though it was daunting, it was completely worth it! The memories and pictures we have are something we’ll never forget. A lot of people said, it was crazy to go when the girls were too young to remember it but my husband and I have the memories and that’s priceless. If you’re considering an international trip with littles, know that there will be chaotic times and meltdowns but life is too short to stay home! Take the trip. When in doubt, always take the trip! This is the stuff you’ll remember about your life. Your baby being home for their 10:00am nap is not.

WE. DID. IT. We actually moved. I realize, that our move was pretty average compared to a 5,000 square foot home, across the country or something of that scale, but to us it was a big accomplishment. The upside to moving from our condo, to an apartment and then to the home we’re now in, all in 8 months is that you definitely learn to purge. Even as I type this, I know my husband is rolling his eyes that I’m a hoarder but I’m really working on becoming one of those mythical minimalists.

Aside from the move, we’re also doing some minor cosmetic renovations including, re-finishing the basement floor, playroom built ins and giving the kitchen a mini-facelift complete with a new backsplash, new hardware, and a new faucet.

To add to the chaos that is moving with small children, we’re off on our first international trip with the kiddos in a week! Say some prayers for us!

From now until then we’re getting more and more boxes unpacked and the house is becoming a little more live-able. There’s a long to-do list in terms of organization and unpacking but I can see the light at the end of the tunnel and that’s pretty exciting!

Here are some before photos and some plans I’ve drawn up on my new favorite website, roomsketcher.com (beware, it’s addicting!).

THE WORK IN PROGRESS

Check back for the playroom reveal in a couple of weeks!

I mentioned in my last post that room and space have been a constant struggle in our household recently. To give you a little back story, we sold our condo right before our daughter Lucy was born this past summer. A house we were purchasing fell through and we moved in to an amazingly convenient apartment just down the street. The apartment is really beautiful with a view of the Chicago skyline and the convenience factors can’t be beat. We have an elevator, a heated garage and our daycare is literally on the corner. From a commuting standpoint for me, my office is only a few train stops away so I can be door to door in about 20 minutes.

As a very pregnant person at the time of our move, I was reluctant to believe we could make it work in about 1,000 square feet. As I write this, I know I made a mountain out of a molehill  because we’re 7 months in and we have all survived just fine! Our apartment has a surprising amount of storage and we put anything nonessential in to another storage facility down the street.

Also as I write this, we are under contract on a new home. We’re set to move in May. I’m excited to start making a home for our girls and for our dog to finally have a yard of her own!

Living in the city we’ve always had to be creative with our space and storage. This home will be a huge space upgrade but as it stands, it could definitely use some better organization and use of space. It is still in the city and with two little ones, it’s easy to get every room taken over by toys and baby gadgets.

As a couple we’re actually not terrible at purging and donating. I definitely have a mild hoarding streak but I try to keep it in check. The cozy living arrangement of the past few months has put a lot in perspective for me. I don’t need half the stuff I have, the girls will grow up just as happy without that giant toy and babies grow out of stuff so quickly you have to save your energy for more important things.

I’ll be sharing quite a few posts in the near future on before and afters of various spaces in the home and some things we’re going to attempt to DIY.

Space is a common topic in my household these days. It’s a constant shuffle to make space for toys, clothes, giant diaper boxes and everything else little humans require. Then there’s the on going battle to make space for the things we need and want to do. Time for work, playing, cleaning, cooking, bathing little bums, working out, bathing ourselves!

I thought this topic would be an appropriate one to open up the new blog as its aptly named, The Room For More.

Since becoming a mother 2.5 years ago, I definitely let myself fall in to the trap that I don’t have the room, literally or mentally to write. I’d blog here and there and was lucky enough to be a guest on Windy City Live when my first, Maddie was 8 months old, but I never gave it the same priority I had before becoming pregnant. My previous writings were geared toward events and things to do in Chicago on a budget. As a very sick pregnant person, going out on the town wasn’t exactly on my agenda. With baby number two, I struggled again with the idea of writing about events and places I wasn’t going to anymore.

Finally, as our second, Lucy neared the 6 month mark, I redefined how I was going about the concept of writing. What I was writing about and when could be different. I’m not the same person I was before and I should stop trying so hard to over think it! So as I write this today, I’m writing about my life as it is – a working parent of two, a wife, a dog mother to my first born, a graphic designer and thankfully, a writer once more!

Much due to the nudging from my husband, that I have more time than I think I do. I eventually believed him and started paying more attention to time, space and the room I have in my own life. For me, there’s time to write while on the train, after the girls go to sleep, before the girls wake up (which seems to only be getting earlier BTW) and as a nursing mother of a 6 month old, during the countless hours pumping!

I’m looking forward to sharing my adventures again and dusting off the old writing cap. It’s good to be back.

I’m a writer, graphic designer, wife and mother of two girls (and our pup), writing about my adventures in it all!